Let’s continue our discussion of representions of women’s bodies this week by thinking about how we “read” bodies (Susan Bordo) and about what bodies we see, value, and/or use and how this affects how we relate to our bodies and how we move through the world.

In 2008, actress and talk show host Ricki Lake and filmmaker Abbey Epstein collaborated on their revolutionary documentary film The Business of Being Born, which explores the current experience of childbirth in the U.S. and the history of the home birth movement.

Featuring a number of birth stories – including Epstein’s, which occurred during the course of making the film, and Lake’s second birth, which was a home birth – the film was made in a similar spirit to the hugely popular Our Bodies, Ourselves, compiled and published by the Boston Women’s Health Book Collective (see Wendy Kline’s article “Please Include This In Your Book…”) in 1973.

As Dr. Kline mentioned on Tuesday, much of our current conversations about women’s reproductive justice centers on access to contraception and abortion. But here is a key piece of reproductive justice for women as well: the messages we give women about birthing and about the options available to them for a safe birth.

THE BUSINESS OF BEING BORN (Full Film)

Over the last month or so, a group of Purdue graduate and undergraduate students have been collaborating to plan a series of teach-ins addressing sexual assault. The idea for the teach-ins was sparked when students learned of two sexual assaults that occurred on or near the campus at the very beginning of the semester. Many of the students were dismayed that one of the reported assaults took place in a rather public spot on the campus near a residence hall.

Purdue students’ efforts are taking place amidst active protests on many campuses around the nation, and amidst a national discourse about the ways in which many universities have failed to protect their students, particularly young women (though sexual assault and sexual violence can affect a person of any sex or gender).

The teach-ins will address three critical areas of sexual assault that relate to college students and particularly to Purdue’s campus:

The teach-ins are free and open to any member of the Purdue or Greater Lafayette community. The first teach-in will be held tomorrow, March 12th, at 6:00pm, in EE Rm 270. 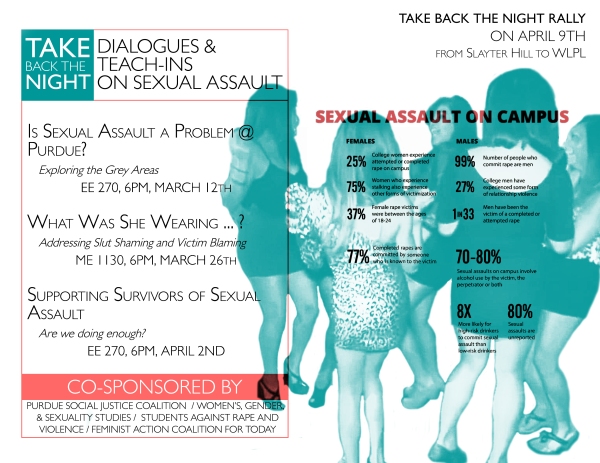 The teach-ins, held once a week throughout March, will culminate in a Take Back the Night rally at Slayter Hill on Thursday, April 9th around 8:00pm.

Currently, the events are being sponsored and organized by student members of the Purdue Social Justice Coalition, the Women’s, Gender, and Sexuality Studies Program at Purdue, the Feminist Action Coalition for Today (FACT), and a new student organization to support survivors of sexual assault called Sara(V), or Students Against Rape and Violence. Students have reached out heavily to the Greek community, including both sororities and fraternities, which is a significant community at Purdue.

After reading both Jessica Valenti and the article on purity balls by Amanda Robb, let’s watch a couple of videos.

A HISTORY OF “VIRGINITY”

First, let’s watch sex educator and youtube hit, Laci Green, who discusses the historical roots of the concept of virginity.

At first glance, virginity wouldn’t seem to have anything to do with economics or marketplace commodities, but the history Green shares makes it clear once again that “the personal is political.”

As Green points out – and as you learned from the documentaries for International Women’s Day last Friday, in some parts of the world, women are still killed in honor crimes if their virginity is even suspected of having been compromised, often by their fathers, brothers, or other male family members.

The ideology behind these balls is deeply rooted in the rise of the conservative (often fundamentalist) Christian Right in the U.S. This ideology depends heavily on traditional, rigidly defined and heterosexual gender norms and also equates virginity – in particular, female virginity – with the idea of physical and spiritual purity.

One thing we need to remember in particular from Valenti’s reading: there is no medically or culturally agreed upon definition of “virginity.” In addition, our understandings of virginity tend to be heteronormative as well – that is, we define its loss based on the act of a man penetrating a woman during heterosexual intercourse.

As in the readings, pay close attention to the language, that is, the rhetoric, used to talk about virginity, love, and sex. And pay attention to intersectionality as well: how is virginity classed? Raced? Whose virginity, for example, is prized and/or encouraged?

In our next class, we’ll talk about sex education. What connections do you see between purity balls and the growth of abstinence-only education in America?

The following clip comes from the documentary When Abortion was Illegal: Untold Stories (1992).

Many feminist campaigns are engaged in breaking the culture of silence and shame that surrounds abortion. Statistically, one in three women of childbearing age will have one at some point in her life, yet we rarely hear their stories. New York Magazine recently published the stories of 26 diverse women, who talk about their circumstances and decisions. 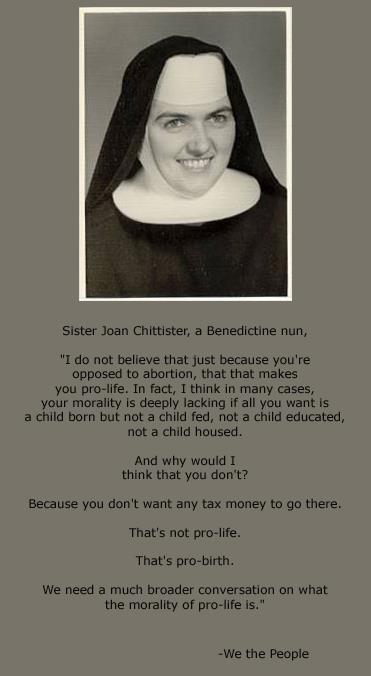 Let’s start our conversation about reproductive rights with some of the recent debate surrounding the dramatic rollbacks of women’s access to reproductive healthcare, including both abortion and contraception. The last few years (2011 and 2012) have seen some of the most dramatic restrictions to abortion in the U.S. since the passage of Roe v. Wade just 40 years ago.

View an interactive map to see where access has been restricted the most.

Visit The Guttmacher Institute for more information about contraception, pregnancy, and abortion in America.

The last year has seen many states dramatically rolling back women’s access to reproductive health services. Last year, states like Georgia, Arkansas, North Dakota, Virginia, and Texas have attempted to criminalize abortion. In 2013, North Dakota passed a law banning abortion after six weeks (that’s a month and a half), before many women even learn that they are pregnant; now, they’re trying to ban it altogether. Most famously last year, Senator Wendy Davis (TX) undertook an 11-hour long filibuster to stall the vote on SB5, which would have banned abortion past 20 weeks and forced many clinics that offered abortion services to close in the state of Texas.

More disturbingly, some of the debates surrounding the criminalization of abortion have also included arguments regarding legal ramifications for miscarriage, a fairly common and natural experience for most women of child-bearing age. For example, Virginia attorney general candidate Mark Obenshain (R-VA) has supported fetal personhood amendments and has now introduced a bill that would require women to report a miscarriage to the police within 24 hours or risk jail time. He was also responsible for getting the VA Board of Health to write stricter guidelines for clinics offering abortions, a political tactic that has been used by several conservative state politicians to effectively force such service providers, like Planned Parenthood, to close their doors. Keep in mind that many of these clincis provided many other health services, including breast cancer and cervical cancer screenings, affordable contraception, and STD testing, especially for low-income women. 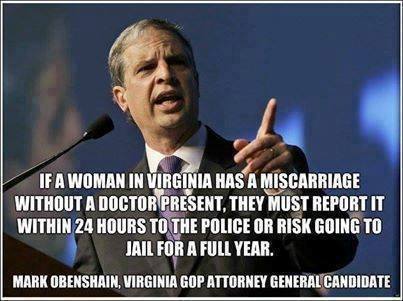 But politicians like Obenshain are tricky when it comes to winning the female vote: he’s been presenting himself as a moderate candidate (compared to his fellow conservative Cuccinelli, who’s come under more public fire for his sexism), billing himself as tough on domestic violence and sexual assault, and he often features his daughter in his ads. He is an excellent argument for why, when deciding who to vote for, the only reliable measure of a politician’s real agenda is his or her voting record.

SO WHAT’S HAPPENING IN INDIANA?

Earlier this year, Indiana passed a bill through the state senate that requires women to undergo two trans-vaginal ultrasounds in order to receive a medication-induced abortion. Point of clarification: a “medication-induced abortion” does not use a medication called Plan B (the generic version is called Next Choice). Plan B does not abort a pregnancy. It can be purchased over the counter (with ID) and taken the morning after unprotected sex (e.g., if the condom broke or slipped off or you neglected to use a barrier method, etc.).  Indiana’s trans-vaginal ultrasound rule targets women who might opt to receive a medication-induced abortion, which is delivered at the clinic and can be used to end early pregnancies of up to ten weeks.

REFRAMING THE CONVERSATION ABOUT ABORTION: AN ECONOMIC ISSUE

In the clip below, Dr. Melissa Harris-Perry reframes the conversation surrounding abortion as an economic issue, rather than a solely moral one.

In Smith’s article, where she argues that framing conversations about women’s reproductive rights in the U.S. as simply pro-life v. pro-choice is not only limiting, but creates “blind spots” that masks the ways in which these two seemingly-opposite positions are actually quite similar in their thinking, and in particular, in their marginalization of women of color and poor women. Could it be that those of us fighting for women’s rights actually have allies on both sides of this debate?

QUESTIONS FOR SMITH’S “BEYOND PRO-LIFE AND PRO-CHOICE”

The theory of “intersectionality” was first used by African-American legal scholar and critical race theorist Kimberle Crenshaw in 1989, though we can trace the concept back to Sojourner Truth’s 19th century speech, “Ain’t I a Woman,” where she questions the race and class ideologies lurking beneath the idea of “woman” and of femininity as something delicate and in need of help.

Crenshaw’s theory asks social science scholars, and feminists in particular to: examine how various biological, social, and cultural categories such as gender, race, class, ability, sexual orientation, religion, caste, and other axes of identity interact on multiple and often simultaneous levels, contributing to systemic injustice and social inequality. That is, Crenshaw asks us not to generalize experiences of oppression (for example, among all women or all women of color), but to understand that forms of oppression do not act independently of one another and that they interrelate, creating for some, multiple forms of oppression at once, thus becoming “multiply marginalized.”

Consider how scholar Kate Flach’s talk about Angela Davis highlighted her intersecting identities as the reason she became the focal point for so much hostility that led to her being targeted by the U.S. government and becoming a political prisoner. 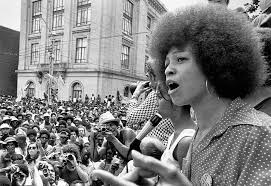 In her book Sister Citizen, Dr. Melissa Harris-Perry of MSNBC references the following stand-up performance by comedian Chris Rock, who claims that a Black woman cannot play second seat and be the first lady. White women, on the other hand, will “play their position.”

Consider how Rock invokes the same stereotypes of Black women found in the media and even in Zora Neale Hurston’s collected folk tales: that they are loud, demanding, and emasculate their men. Now consider this fact:

“Rock’s comic imagination is fueled by widely held assumptions about who black women are in relation to black men: that African American women are strong, unyielding, and uncompromising while black men are endangered and emasculated. The image of aggressive black women dominating their male partners persists despite empirical evidence that African American women are more likely to be victims than aggressors in heterosexual partnerships.

Black women suffer higher rates of domestic assault and homicide than women of other racial and ethnic groups. Their romantic attachments are also linked to their growing incarceration rates: black women’s crimes tend to be ancillary to those of their male partners. Black women are also the women most likely to face unassisted child rearing and the vulnerability to poverty that single parenthood entails. The reality is that black women’s political, social, and economic marginalization ensures that they nearly always ‘play the background,’ but Rock can get an easy laugh by evoking the familiar stereotype of the domineering black woman” (Harris-Perry, 288).